Yesterday marked the 40th anniversary of the Star Wars franchise. What better way to celebrate than to show some examples of how Star Wars has appealed to Native artists.
Besides a notable similarity between traditional Hopi hairstyles and how Princess Leia wears her hair, as illustrated by Nicholas Galanin, Star Wars has little direct relevance to Native cultur 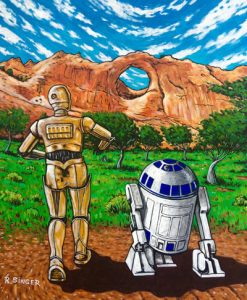 e. But of course Native peoples watch movies too. And the classic tale of good triumphing over evil seem to hold something different for everyone to identify with.

Navajo artist Ryan Singer, represented by Kiva Gallery, relies heavily on pop culture in his painting so it’s a small surprise that he has devoted a series of recent paintings to Star Wars. Singer explained the attraction in a radio interview:

“as I got older I started to, kind of like fusing pop-culture imagery with the Navajo culture. Somehow that Star Wars just, kind of like, manifested in there. And, I always thought of Tatooine as the desert that was close to Tuba City where I grew up, and the Sand People nomadic people real similar to how the Navajos were. So, there were all these similarities I saw in the movies. There really is, like sort of, two different worlds, you know, as far as culture. I try to bring them together and mix them up.”

The imaginary movie posters of Jeffrey Veregge has been featured on the blog before. Veregge depicts familiar Star Wars motifs and characters in the artistic style inherited from his Port Gamble S’Klallam Tribe. 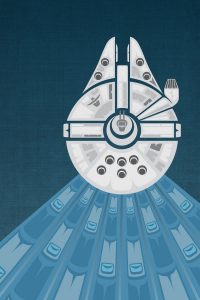 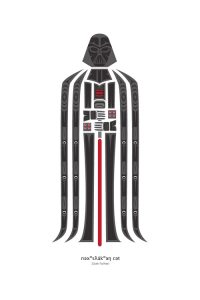 A few years back, Andy Everson did a series of Star Wars – themed paintings that had a political twist. In Everson’s hands, Star Wars battle of light and dark was referenced in order to address political concerns amongst his own tribe. 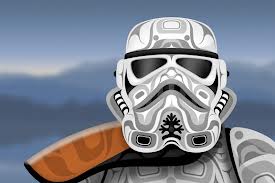 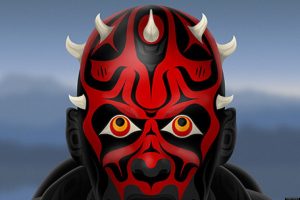 Steven Paul Judd specializes in “impossible” encounters of pop-cultural icons with Native American history. His photoshopped juxtapositions are often strikingly
funny but also remarkable for demonstrating a missed encounter and the exclusion of Native culture from mainstream pop culture.

Excluded or not, the above artists have all taken something they like and made it their own, even though the original content has no explicit relation to their culture whatsoever. I don’t want to read to much into this, but in a way I find the interest in Star Wars encouraging. It demonstrates a DIY approach to inclusion. Looking at these images I feel  – If I may allow myself to partake in Star Wars geekiness and reference the revised subtitle of the very first Star Wars movie –  A New Hope that Native culture may take a bigger slice of pop culture one day.