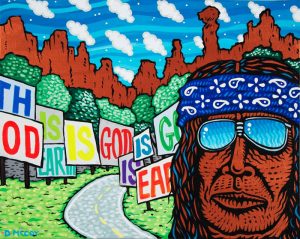 privilege. Here ’s a new one with Daniel McCoy . It’s a good talk and I highly recommend you give it a read to learn all about McCoy’s fondness for Death Metal typography, cartoons, and food logos. He also talks in earnest about the struggles of the art world  – financial and other –  and the fear of it affecting the art.

Like I’ve stated before here on the blog, Ryan Singer’s art is a glorious combination of 1980s era skateboard graphics, rock poster art, and comic books.

Recently, Singer has taken his pop cultural obsessions to the next level by fusing iconic Star Wars characters with traditional Navajo milieus. In Singer’s paintings, Tuba City becomes Luke Skywalker’s home planet Tatooine and gigantic AT AT walkers can be seen marching through a wintery Shiprock, New Mexico. Somehow, the transformation manages to come off as completely logical. Ryan Singer can make the seemingly incompatible come together in a completely natural way. This is also the case in the paintings I want to put into focus today. 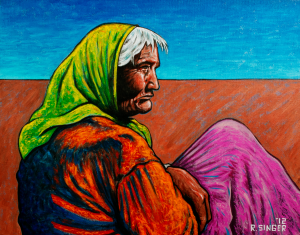 One of Singer’s stylistic trademarks is his use of heavy outlines. Of course, strong outlines are a big part of the low brow/comic book aesthetic that Singer has adopted. But they are rarely associated with scenes of a more solemn and introspective character. That’s why I’ve been very taken with two of Singer’s paintings in Kiva Gallery’s collection. One is of an elderly woman staring out of the frame into the unknown. The fact that the viewer doesn’t see what she’s gazing at has the effect of turning the gaze inward rather than outward. Singer’s traditionally thick line work underscores this experience. There is much emotional content that can be read into the effect of the outline. The outline is so heavy it makes her seem anchored to the landscape. At the same time it closes the figure off and makes her appear isolated from her surroundings. The landscape behind her is simplified so that the woman pops out even more, which makes it impossible for the viewer to ignore her introspection. This is one of those rare paintings that instantly catapults the viewer into pondering the inner life of a figure that came into being solely through paint. Like Leonardo’s Mona Lisa, the viewer can’t help but wonder “what on earth could she be thinking about”. Yes, I just compared Ryan Singer to Leonardo Da Vinci. The comparison is apt but perhaps not adequate, because in a way the contemplation in front of Singer’s painting is more profound than Mona-Lisa’s. This is after all a Native woman so you know she’s seen some shit in her days. More than the smirk on the face of her more famous art historical relative would suggest. 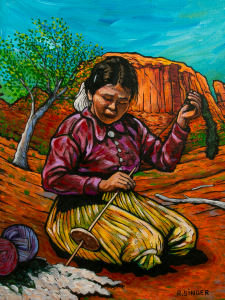 Kiva Gallery also has another Ryan Singer painting with an unusually serene mood. It is a deceptively simple scene. But if you allow it, the outline will tell a deeper story about time and stasis, tradition and generational renewal. Again, it’s a painting of a woman in a landscape. In contrast to the woman above, this woman is young. Her activity, however, is old. She is spinning wool. The landscape around her seems to respond to her activity because it curves around the girl almost to envelope her. But there is that thick outline again, tracing the contours of the girl’s body and shielding her off from her surroundings. It is almost as if the landscape is moving more than she is. A strong outline reifies movement rather than capture it. In a way it stops movement and freezes it which makes the experience of superhero comics, which are of course full of movement, deliciously paradoxical. The girl spinning wool seems remarkably still despite being caught mid-motion. From the perspective of her activity, time has stopped moving. The girl probably learned how to spin wool from her mother, and she in turn will teach her daughter. The activity doesn’t belong to her, she belongs to the activity that has existed before her and will continue to exist long after she is gone. 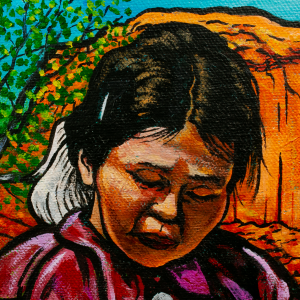 I’m very grateful for these paintings and proud to have them grace the walls of Kiva Gallery. While they are completely representative of Ryan Singer’s painterly style, the quiet subject matter makes at least this viewer more attentive to the function of his artistic techniques and the stories they tell.