Today marks the beginning of Santa Fe’s Indian market. Known as the world’s largest exhibition event for Native American arts, the market hosts art from over 900 artists. During two days, it attracts over 100,000 visitors from all over the world.

The market is an amazing opportunity for artists to reach customers they would otherwise miss out on, and many artists count on profits from sales at the market to support them throughout the year.
However, at a market this size it is perhaps inevitable that some artistic nuances get lost, and perhaps some artists play into the hands of what they think the public might want a little too much.

The downside is that, although the event is well-intentioned and supports a myriad of artists and artisans, it’s not the best platform for new voices in Native American art. The market fosters stereotypes of “Nativeness” that don’t also take into account the American Indian artist as a contemporary individual who engages with mediums and concepts from both inside and outside their culture.

Perhaps such critique is the reason for a controversial decision taken by the management for this year’s market.
Since the early 1990s, the market has operated under a tenure policy that allowed some longtime established artists an automatic space at the market, without being approved by the selection committee.
Dallin Maybee, SWAIA’s (Southwestern Association of Indian Arts) chief operating officer, defends his decision to end tenure by claiming that it was never applied fairly and hopes its’ discontinuation will make room for new artistic talent.

Another sore spot of this year’s market has been the changes in it’s application system. Artist’s from the older generation have had trouble with the application process itself which is now exclusively digital. Other artist’s have found themselves rejected on vague criteria or without any explanation at all.

Whether these changes have had any bearing on the quality of the market remains to be seen and I will update you on my opinion as soon as I have processed the impressions of my visit. 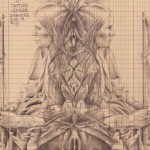 It is with great delight that Kiva Gallery finds the face of Chris Pappan adorning the cover of the latest issue of Native Peoples Magazine. Pappan is one of the Gallery’s favourite artists and we are proud to have several of his works in our collection. A truly accomplished draftsman, Pappan brings a modern sensibility to the tradition of ledger art. He would rather be called “big city Indian” (he lives in Chicago) than Native American and this progressive stance shines through in his art.

Like many other contemporary artists – for instance Douglas Miles, Ryan Singer and Frank Buffalo Hyde – Pappan’s art engages with what I would call second-order representations. They are, in other words, not primarily trying to convey a “truth” about Native culture but are rather concerned with representations of representations – of movie stars and actors, and how Native culture has been represented by people outside of it. Needless to say, when representation of a culture lies in the hands of people who know nothing about it, the result is often skewed and misguided. Nevertheless, these images have entered the collective consciousness of popular culture, and the task many contemporary Native artists have taken upon themselves is to point to the fallacies of these images.

If we are to believe Michelle H. Raheja, this is far from an easy task. Raheja suggests in her book ”Reservation Reelism” that when the 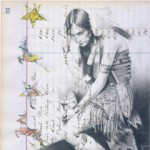 hegemonic culture work its hardest to deny and suppress Native Americans, any evidence of their existence becomes cause for celebration. Hence for a Native American audience starved on images of their culture, the fact of visibility has sometimes overridden concerns about the hurtfulness of distorted representations. This could explain why many Native Americans of the older generation have taken even obviously negative representations and characters such as Tonto to heart. Simply put, it was all they had.

Pappan often relies on stereotypical imagery of Natives. Far from enabling a facile identification with these images, however, Pappan employs aesthetic strategies that make them slip from the viewer’s grasp. Pappan’s drawings often include distortions that disturb the proper reception of them. As Chris Pappan explains: “My images are distorted to reflect the distorted image of Indians in contemporary culture and the way Indians themselves are distorted by images.” When looking at a Pappan drawing, therefore, one gets the feeling that, according to the laws of perspective, it does not cohere. It’s as if a single figure is being viewed from different spatial positions simultaneously. 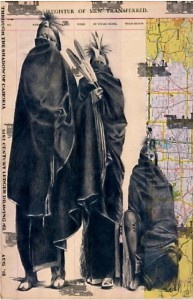 There is art-historical precedence to this technique. Ever since the laws of perspective became an artistic institution, artists have liked to play around with them. The art of turning perspective on its head almost became a genre of painting unto itself and it became known as “anamorphosis”. Leonardo Da Vinci was a avid practitioner. Historically, anamorphic distortion in painting has been used to simultaneously present and disguise a content that some might regard as controversial. It was a way to sneak burlesque and sexual imagery as well as political commentary past a possibly censorious establishment. This was made possible by the way an anamorphic picture has to be viewed from a specific angle to make sense. From a frontal position, an anamorphic picture appears an incomprehensible mess. But viewed from a particular perspective, the content of the image clearly appears.

This historical background to anamorphosis serves Pappan’s purposes of subverting stereotypes well. It’s as if Pappan uses the device of distortion to suggest that beneath stereotypical imagery lies another reality. One that is only attainable by changing ones perspective and outlook on the world.

There is a poetry of instability and elusiveness to Pappan’s images. While rooted in past and possibly damaging representations, his art also suggest that these are not the final word. The image of the Native American is open to revision, and changing it is what a new generation of Native artists have set out to do.

Chris Pappan and his art can been seen at SWAIA – Santa Fe Indian Market August 18-24.